May 21, 2018 – Tanner Krause, the fourth generation of family-owned convenience store chain Kum & Go, has been named President of the 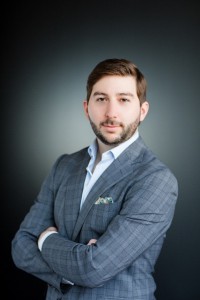 company, effective June 1, 2018. In this role, he will oversee Marketing, Operations and Human Resources functions for the company. His father, Kyle J. Krause, current CEO & President will transition to Chairman & CEO.

“Tanner has a passion for our associates and an intimate understanding of the company having grown up working in Kum & Go stores and being a part of the family business,” Kyle says. “I’m excited for the energy he brings as we write the next chapter in our company’s 60-year history.”

Tanner Krause began his career at Kum & Go at the age of 9, helping to stock shelves, sweep floors and ring up customers, and continued working in stores through his high school years. While in college, he completed internships in both the Real Estate and Business Insights & Analysis departments at Kum & Go. After graduating from Loyola University Chicago, he spent time in the E.& J. Gallo Winery Management Development Program, working at Wirtz Beverage Group in Chicago, and Empire Merchants in New York City, serving in Sales Representative and District Manager roles, respectively. He then came back to Kum & Go as a District Supervisor in the Des Moines area for a year before returning to school to obtain his Master’s in Business Administration from DePaul University in Chicago.

In 2016, he became Director of Operations at Kum & Go, helping lead operational excellence for nearly 5,000 store associates. In 2017, he was named Senior Vice President, Grow People (Human Resources), where he successfully implemented a number of new benefits for associates, including expanded PTO, maternity, parental and adoption leave policies, as well as an associate food and drink discount program. He recently sponsored a major employment brand effort, as well as a comprehensive standardized training system for Kum & Go store general managers.

Now, as President, he’ll increase his responsibilities to include Marketing and Operations, as well as Human Resources.

“This is an important step in my lifelong journey to make Kum & Go a fantastic place to work and shop,” says Tanner. “It is an incredible honor to follow in the footsteps of my father, grandfather and great-grandfather, and I’m looking forward to continuing to deliver more than our associates, customers and communities expect.”

In addition to his work at Kum & Go, Tanner serves on the board of the Boys & Girls Club of Central Iowa. He and his wife, Hannah, live in Des Moines.

For nearly 60 years, Kum & Go has been dedicated to the communities it serves, sharing 10 percent of its profits with charitable causes. For four generations the family-owned convenience store chain has focused on providing exceptional service and delivering more than customers expect. Established in Hampton, Iowa, in 1959, the chain has since grown to employ more than 5,000 associates in more than 400 stores in 11 states (Iowa, Arkansas, Colorado, Minnesota, Missouri, Montana, Nebraska, North Dakota, Oklahoma, South Dakota and Wyoming).

Customer Relations
Email our team at customerrelations@kumandgo.com
Call us at 888-458-6646